Life in the NICU

Beep, beep, beep, beep. The sound is so rhythmic, so soothing. Almost hypnotising. Then something snapped me out of the trance. The beeping was getting and higher pitched. The machine started blinking. I knew what was happening. “Common Katie girl, take a breath for me. Please Katie. Just breathe.” I chant this over and over to my two day old daughter as I watch her lips turn blue again. “Breathe baby girl. Please.” I struggle to get out of the chair. Fresh out of a C-section, I didn’t have the strength to push the footrest down. Sounding more panicked than I intended, “Help me!” I yell to my Mom sitting in the corner of the room, whose eyes haven’t left Katie, saying her own prayers.

I struggle to my feet, still not able to stand upright. The nurse runs in, eyes fixed on the machines. All I can do is watch. “We want her to start breathing on her own” she tells me. “Breathe baby girl, please.” A tear runs down my cheek, panic rising in my chest up to my throat. After too long the nurse steps in and starts rubbing her chest, her face, bringing her to a seated position and rubbing her back. I finally see her chest rise again and I realize I stopped breathing. Two more tears run down my cheeks as I gasp for air too.

I grab her tiny little hand. “Thank you for coming back baby girl. Thank you!” Her lips slowly changing back from blue to pink. Meanwhile her twin sister, Hazel, sleeps peacefully through the commotion just a foot away. I thought to myself, how in the world are we all going to survive this?

Katie has always been the one to keep my on my toes. She’s the smallest of my twins. It was her water that broke at 34+5 weeks. It was her feet and bum in the birth canal calling for an emergency C-section moments after arriving at the hospital. She was so determined to come screaming into this world early and I knew our lives would never be the same again.

We re-lived this scene, with machines going off, Katie turning blue, my mind screaming for help, and too many tears to count for a few days. They eventually put Katie on caffeine to help stimulate her little body and help her remember to breathe. A little baby espresso they called it, trying to make light of a very scary situation. These episodes kept happening but she started breathing again on her own, so the caffeine worked. Small miracles, right?

Meanwhile both twins were losing weight. Too much weight they told me when we hit 11% of birth weight lost. Even thought I was hooked up to a pump, my boobs weren’t keeping up with two little babies. Neither of the twins had their suck/swallow/breathe reflex, being born too early. We had to “hang” their feeds, which is a fancy way of saying they poured my breast milk and formula mix into a tube and taped it above their head. This tube was connected to a smaller tube that went through their noses down into their bellies. We were force feeding them to keep them alive. Everything was to keep them alive. This balance of life and death was palpable in the air, always hovering, always a possibility.

Hazel (L) & Katie (R). Our first double cuddle. You can see their feeds in tubes taped to the chair behind me.

As the mother, my only job was to be a warm body and a milk machine. When their bilirubin levels got too high and they had to go under the blue lights, I was demoted to just a milk machine. “No cuddles today” I was told for three days in a row. I somehow convinced the nurses to let me hold them for their feeds, at least. I needed to feel them to know they were okay. And I needed them to know they weren’t alone. Constantly walking that line.

When Hazel ripped her IV out, they poked her over and over trying to find a tiny vein, finally landing on one in her head. I was horrified. At what point do you step in to say enough is enough? She still wasn’t drinking on her own and I knew this IV was keeping her hydrated. But it still felt like torture. I was always fighting what feels wrong and knowing what is right. I held her for hours that day apologizing over and over to her, my tears falling into her hair, feeling like I had already failed her. She didn’t want to come early. She didn’t ask for this.

We had a two year old at home so I couldn’t live at the hospital like the other mommas I passed in the hallways. Every morning I would help get my toddler, Nora, up for the day. We’d sit and sing songs, read stories and watch Elmo while I carefully put her hair up in pigtails and get her dressed. My husband would take her to daycare and my Mom would come pick me up to head to the hospital. Still recovering from a C-section, I wasn’t able to drive yet. We’d sit there all day, holding and caring for these tiny miracles however we could and were allowed. After their afternoon feeding we’d pack up and venture out into the ice and snow and make our way home, just in time for Nora to return, bouncing around the house and lightening the mood. After tucking her in tight for the night, my Mom would stay at the house and my husband and I would rush back to the hospital just in time for bath time and the twins’ evening feed. Only to return home by midnight and do it all over again the next day.

The NICU is two steps forward, one step back. Growth is not always linear. With two babies, growth never seemed to happen at the same time either. I was exhausted, mentally, physically, and emotionally. Every ounce of strength I had was poured into my three children. And all around me I could see everyone trying to support us in any way they knew how.

The NICU is not a solo sport. It is more like a theater production with the main cast, supporting roles, director, producer, an audience cheering you on, and plenty of drama. Our supporting cast was the only reason we survived as well as we did. Simple things like sitting with me to give a baby some one-on-one TLC, taking Nora on an adventure, or checking in daily. Our village went above and beyond for us in a time when we needed them the most. My Mom was my rock. She spent Monday-Friday with me sitting in the hospital pouring everything she had into me and my girls. My Mother-in-law would come and collect our laundry and bring everything back clean, sorted and folded. Did I love the idea of my Mother-in-law washing and folding my gigantic postpartum undies? No. Did I want to do the laundry instead? Also no. Your pride goes out the window pretty quickly when you’re in survival mode. When my husband got sick from exhaustion my best friend didn’t hesitate to jump in the car after an ice storm to drive me to the hospital and sit with me one evening. So many of our friends left their own babies at home and scrubbed in to come visit us and let us know that we were important too. I’m convinced the only reason we survived was because of our village. 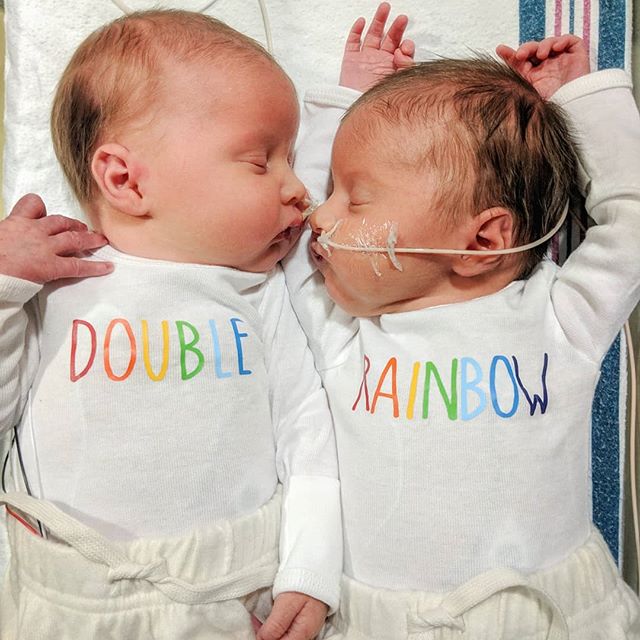 I remember coming in one morning and seeing some clothes laid out on my chair. Something so simple was a sign of so much more. It meant that at six days old, the girls were able to get dressed for the first time. They were moving from their isolates to open-air cots. This was a gigantic step forward! They were able to regulate their own body temperatures. They were starting to transition from preemies to babies! I was finally able to start thinking about the future, about bringing them home one day. Two weeks later, after 17 long days in the NICU, we did just that.

One of the magical things about the NICU is you get to watch a miracle happen every day. I got to watch these tiny babies hit developmental milestones they should have never had to hit outside the womb. I got to watch them learn how to use their instincts to survive. We went from fully tube feeding them to both of them working up the stamina to drink their full feeds over the course of a week. It was an incredible feat to watch and just reaffirmed to me how strong these little babies are.

I watched them get stronger day by day, but there were certain milestones they had to hit before they were able to come home. We talked to the nursing staff a lot about how to manage if one of them was able to come home before the other. It was extremely stressful to think about leaving one behind. At least when I walked away at the end of the day, they had each other. The thought of leaving only one behind broke my heart.

In order to come home they had to eat their full feeds by themselves for a full 48 hours and continue to gain weight. In addition, Katie had to go a full seven days without any caffeine or breathing spells before considering discharging her. We had a white board in our room that had all of their numbers on it and space where the nursing staff could leave us notes. For a while Hazel was doing better with her feeds and we were preparing to bring her home first. I asked the universe for a miracle and a miracle happened! Katie woke up and decided to catch up to her little sister. Suddenly the board was filled with feeding times and ounces consumed and happy faces from the nursing staff. I could feel in my bones that we were finally on a good path. Within 24 hours Katie caught up with Hazel and each of their 48 hour discharge clocks started at the same time.

I remember so clearly our nurse coming in and saying “so tomorrow’s the big day!” I just stared at her not fully comprehending that this journey was coming to an end. Even though we had been working towards discharge we were not ready! This routine is what I knew. Leaving the hospital seemed so foreign to me. It hit me all at once that once we walked out those doors it would all be on me to keep two infants alive. Terrifying! On discharge day I was shaking, filled with anxiety, excitement, and straight up fear. Our nurse walked in with discharge papers in hand and I burst into tears, finally letting the flood gates open and letting out everything I was holding onto. At 17 days old, our girls were coming home at the same time.

Walking out those sliding doors for the last time was surreal. I was humbled by our time in the NICU and so grateful for the knowledge and experience of the amazing team that kept my two miracles alive. But it was time to start a new journey, and what a wild ride it’s been!

The day I was accused of child abuse.

Twin must haves – the first year

How to survive maternity leave without going broke

Ah the age old issue, how to survive maternity leave without going broke. I don't claim to be a financial expert by any means, however I've been through two year-long maternity leaves (yay Canada!) He